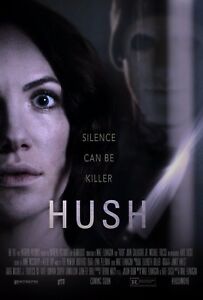 Today I’ll be reviewing the movie Hush. I saw this movie a while ago while doing a normal horror binge that I’ve explained I do, and I turned out liking it much better than I thought. Since this review does contain a few mild spoilers (nothing movie-ruining, but I do ruin a few elements of surprise further down), I’ll give my rating up here in case you’d like to watch it for yourself, completely spoiler-free. I rated this one 3.5 stars, a rating I didn’t have before. Most of the movie is actually really enjoyable, but there were a few scenes I just couldn’t forgive, and I had to bump it down at least a little bit.

Hush can be found on Netlix, and its description is “A deaf writer who retreated into the woods to live a solitary life must fight for her life in silence when a masked killer appears in her window.”

It has a bit of a slow burn in the beginning. The first few scenes really don’t do much except establish Maddie’s deafness, and the things she relies upon such as her fire alarm — a super-loud siren with a strobe light — to keep her safe. The scene also establishes that Maddie is a writer/author, and how she comes up with her plots using something she refers to as “writer brain” which plans out different scenarios and outcomes, which becomes an important detail later on, and something I really enjoyed the use of.

One thing I didn’t love about this movie is before anything really happens, Maddie is getting calls from someone named Craig, who is apparently an ex-boyfriend of Maddie’s. I spent both watch-throughs of this waiting for Craig to somehow become relevant, but he never really was, and I sort of dislike that. While yes, people do get random texts and calls, in a horror movie it seems like something like this should maybe end up being semi-important? The fact that he never was sort of rubbed me the wrong way, and felt like an unnecessary detail, or perhaps a too-convenient red herring.

There are a few cases of injuries being forgotten until it’s relevant. Not enough to ruin the movie, but enough to be at least mildly annoying at times. The murderer, for one, is shot with a crossbow bolt in one of his arms, but then seems to promptly forget about it until Maddie sticks her finger into it later. Now, I’ve never been shot with an arrow or a crossbow, but I’m assuming that’s the sort of thing that’s going to render using your arm difficult. While he seems to forget about his injuries until it’s useful, Maddie never forgets about her sustained injuries.

John is almost entirely the reason this review lost half a star. John is the boyfriend of Maddie’s neighbor Sarah, and is briefly mentioned in an earlier scene. John shows up, and for the briefest moment in, you think that Maddie might be saved. However, the killer somehow outsmarts John by pretending to be a police officer? He has no uniform, badge, police car, or weapon, but he comes in hot, and somehow John just…believes him? Just hands over his phone so the killer (who he thinks is a cop) can make some phony call for backup? Oh, and John never asks the alleged officer for any sort of identification, name, badge number, or ANYTHING, just simply believes what he’s told? Maybe it’s supposed to be that John is not a smart character, but I was just simply so frustrated that he went so far as to //tell the killer where the spare key to Maddie’s house was.//

The attention to detail in the movie is a little hit or miss, but I really do enjoy the small things that movies sometimes overlook. Maddie is intelligent enough to recognize the severity of her injuries and knows some basic first aid. She’s smart enough to try and factor in her blood loss/weakening physical strength into her ideas to either escape or fight back, and I really enjoyed how capable and competent they made her, as far as being able to take a step back and use her critical thinking skills, even while she’s scared and bleeding and in a situation, she’s not sure she can/will win.

While there were a few points, mentioned above, that I really did not like, I really think the good outweighed the bad here. It’s got great tension and pacing, and while there are a few hiccups, I enjoyed it as much the second time through as I did when I initially found it on Netflix.